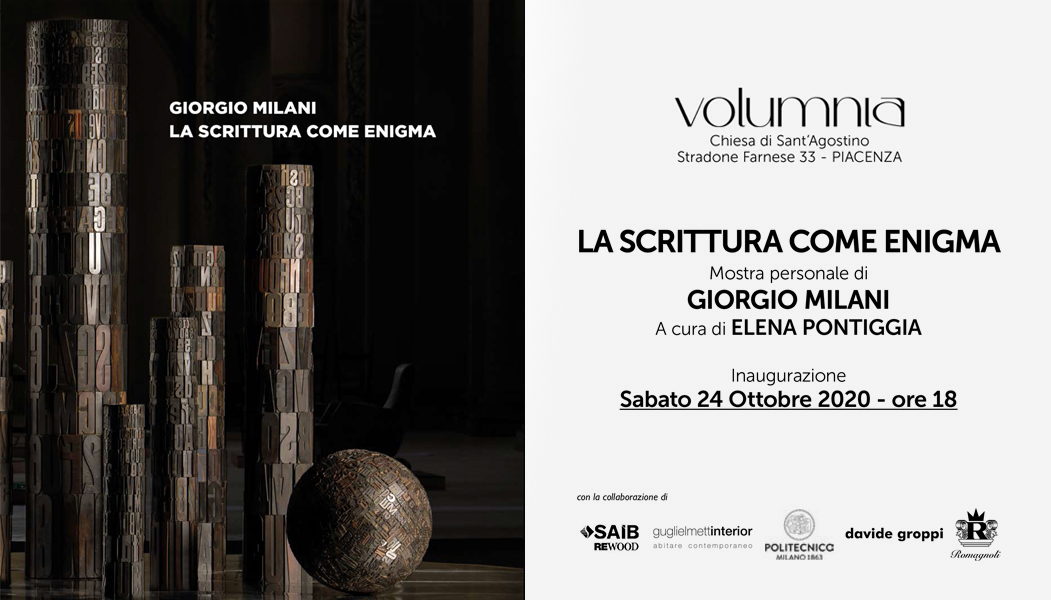 The imposing Renaissance rooms of a deconsecrated church in the heart of Piacenza house 120 works by the Piacenza artist, including mostly unpublished paintings and sculptures.

From 25 October 2020 to 6 January 2021, Volumnia, the space dedicated to art and design, inside a deconsecrated church in the center of Piacenza, hosts Giorgio Milani’s solo show, Writing as an enigma.

The exhibition, curated by Elena Pontiggia, offers 120 works by the Piacenza artist, including mostly unpublished paintings and sculptures, divided into ten sections that document his most important cycles, from the Gutenberg Towers to the Babels and the East West Poetaries, from Sublimations to Gutenberg’s Shrouds and Songs to Rare Shadows.

Giorgio Milani’s expressive style revolves around assemblies of movable wooden type for printing no longer in use that the artist finds and collects in the warehouses of old printers and recycles as materials for art. They are characters that, ideally, preserve the memory of everything they have printed, the memory of all human knowledge.

Those carved woods, different in shape and size, and also in material and time of production, are no longer used as tools to leave the imprint of letters or other signs on the page, but to build three-dimensional works; they are works that do not have printed words and images, but physically real words and images, to be touched as well as to be seen.

As Elena Pontiggia writes in the introduction to the catalog: “Milani’s writing, her Poetaries, do not make up a rational catalog or a school filing, but are rather the place of the enigma, not because they reveal the mystery, but because they reveal that the mystery exists. Letters and signs are collected in orthogonal courses, within squares and rectangles, in rhythmic and musical spaces, but they are not read neatly and judiciously. Try to read them: you will not succeed, because they are hermetic like the leaves of the Sibyl. They are an encyclopedia of Babel, that is, of misunderstanding “.

Catalog GLI ORI Editori Contemporanei, with text by Elena Pontiggia and an interview by Matteo Galbiati with Giorgio Milani.

The exhibition is organized in collaboration with Politecnico di Milano, Guglielmetti Interior, Davide Groppi, Romagnoli and SAIB who provided the material for the installation, made 100% with recycled wood and which, once the exhibition is over, will be reworked to obtain new panels.

Biographical notes
GIORGIO MILANI (Piacenza, 1946)
The Poetaries that characterize his current production are the result of a path that began in the mid-sixties and developed in the study of the relationship between image and writing.
The Poetaries made in the late 1980s are exhibited for the first time in 1997 in Milan in the exhibition “Poetari di fine Gutenberg”, organized by the Stelline Foundation under the patronage of the Municipality of Milan and curated by Tommaso Trini.
Since then the notoriety of his Poetaries has expanded in Italy and abroad.
In 2002 the Druckunst Museum in Leipzig dedicates an important exhibition to him.
In 2005 he was invited to the XIV Quadrennial in Rome where he exhibited “Open Work”, a great poet made up of about 1,800 friezes and typefaces.
In 2007 the DFG (Deutsche Forschungsgemeinschaft) organized the largest exhibition of Poetaries in Bonn, one hundred works including paintings and sculptures from different European countries.
In 2009 he was among the sixteen international artists invited to Berlin for the realization of some works in the Unter den Linden State Library.
In 2010 he created in Salsomaggiore “Open work between East and West” scenographic sculpture-fountain in bronze and steel placed in the context of urban redevelopment in Piazza Lorenzo Berzieri.
In 2011 he inaugurated his greatest poet-work, “Eco di Passi nella Memoria”, in the context of the restoration and recovery of Campiello di Vigonovo (VE), installing 190 panels of laser-worked corten with verses on the entire facade of the historic building chosen together with Philippe Daverio.
In 2013 he exhibited in Berlin a video and five sculptures in the solo exhibition “From Babel to the stake” in the spaces of the Italian Embassy, ​​and simultaneously, at the Italian Cultural Institute, ten poetaries and frottage in an exhibition entitled “From Babel to dialogue” .
In the same year, on the occasion of the Year of Italian Culture in the United States, he exhibited in New York in two solo exhibitions: “Poetari e frottage” curated by Philippe Daverio at the Consulate General of Italy and “White Words” at Boffi Soho .
In 2014 he designed and built the Portal of the Church of Santa Franca entitled “The Door of Light” and the laser-worked corten steel facade of the Madonna of Lourdes in Piacenza.
In 2016 he inaugurated a new series of white works entitled “New Poetaries”. Sublimations, Shrouds, Carvings at Villa Rospigliosi, Spicchio di Lamporecchio (Pistoia) with texts by Marco Senaldi, Luciano Caramel, Tommaso Trini, Philippe Daverio.
In 2018 Whitelight Art Gallery organizes three solo shows entitled “Di parole I Arte” in Milan, Rome and Turin.

VOLUMNIA – ENRICA DE MICHELI
Volumnia is a project around design and art that inhabits the spaces of a deconsecrated church in the center of Piacenza. Renaissance heart and foundations, eighteenth-century facade, it is a breathtaking space steeped in history, with roots at the foot of majestic colonnades that rise dozens of meters from the ground.
The gallery owner Enrica De Micheli, whose business for more than twenty years has ranged from antiques to design, has launched the enhancement of this historic building which will host a bistro and intense cultural programming in its exhibition space.